Flooring Needs: A metallic floor finish throughout the rooms and hallways

Once a prime tourist destination located directly on the ocean, this motel was in dire need of a facelift. Full demolition of the existing finishes had occurred, only leaving a bare skeleton to work with. Existing floors were a composed of pre-cast concrete slabs, which had been hidden under the carpet until the demo. To reduce the risk of vapor transmission in close proximity to the ocean, New England Floor & Wall recommended the addition of a moisture barrier. Once a game plan was made, NFW began installing using the following scope:

Scope of Work for Resinous Flooring:

Tasked with a momentous project, New England Floor & Wall was able to finish this phase to meet the schedule set by the investment firm. With a 21st century facelift, Atlantic Terrace Motel will be able to proudly show off this property for years to come. 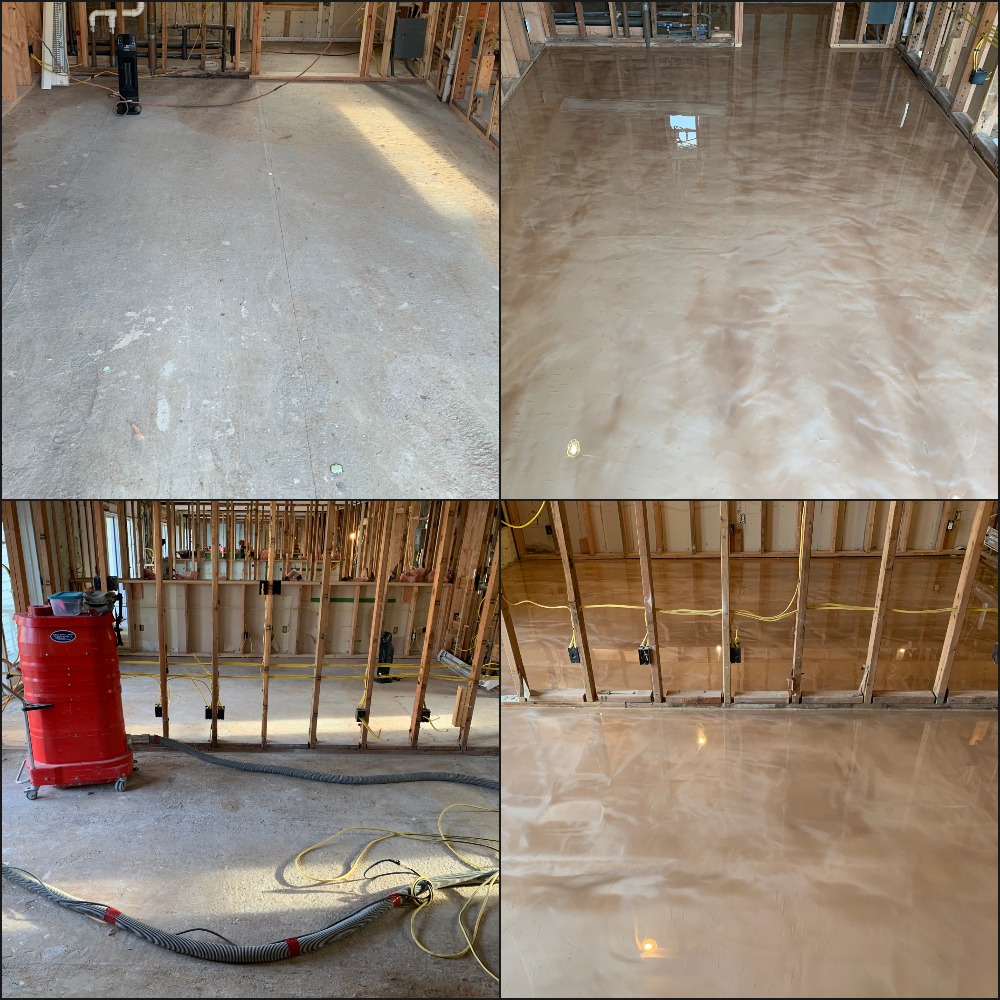 Customer: Rhode Island Convention Center, Providence RI
Needs: A decorative floor finish that could stand up to the rigors of a convention center

With the existing floor removed and a checkerboard of adhesive left behind, NFW was commissioned to install a flooring system that included the lounge for alumni/investors, the back of house thru-way, and the storage area for the various events that happen regularly. With a few ideas, NFW went to work coming up with various samples of a unique, yet subtle metallic floor that the customer approved prior to the start of the floor. Doing this ensures that the customer can physically see what they are going to be receiving as opposed to a picture idea.

Conclusion: With a major event coming up, New England Floor & Wall was able to finish this project ahead of schedule, which ensured the convention center had ample time to prepare. What was once a dated area that needed a refresh, the completed areas in the convention center will now be enjoyed by many people throughout the year.

With the varying needs of businesses to have interior containment areas built, New England Floor & Wall will build secondary containment spaces specifically to not allow any liquid from spreading elsewhere.

These areas are primarily required to resist degradation when exposed to specific chemicals or liquids, pH fluctuations, as well as caustic solutions. Containment areas provide added security when storing a multitude of liquids, and have options available for many different requirements, such as (but not limited to):

Storage Tank Insurance – Many high priority facilities store large amounts of raw material on site. Regulations require that these containment areas be able to hold 10% of the total volume stored, or 100% of the largest tank as insurance if there to be any failures.

Wash Down Procedure – Areas that receive frequent wash downs may benefit from a containment area surrounding the drain, as this will reduce the risk of contamination.

Water Reclaiming/Recycling – Many businesses nowadays are reducing their carbon footprint by whatever means they can. Grey water systems, when combined with containment areas and water recycling, helps reduce this by eliminating the carbon emissions associated with pumping and treating used water.

That being said, NFW uses various measures, including epoxy, vinyl ester resins, as well as various chemical resistive products to refinish an existing or create a new, containment area as needed in each situation.

These areas can be impregnated with fiberglass to increase integrity. They are finished with custom berms and cove and can be created with spark proof, anti-conductive or electro-static discharge (ESD Flooring) materials as needed.

Customer Name: Curtis Products
Location: Bristol, Connecticut
Customer Needs: A proper floor coating that has ample grit in it as slip resistance is a must

On May 11, 2018, Curtis Products contacted manufacturer Florock to help provide a quote, and that due to the town of Bristol’s interest in this business’ relocation, that they needed this estimate as soon as possible. After a few hours of correspondence, as well as information on the current condition of the slab, New England Floor & Wall (NFW) was able to send out a proposal that same day.

New England Floor & Wall Process: Over the next two weeks, the president of NFW, Ken Bonney came up with a game plan to combat the oil saturated slab, as it had never been sealed. He made two site visits, the first being a preliminary visit to see how much the floor had been beaten up by the previous owner, which to his surprise, they had kept each area “clean” by machine shop standards. On June 20th, a second site visit was made to do preliminary moisture tests, all of which passed with ease. During this visit, Curtis Products president, Ron Weintraub, was able to choose how much slip resistance, which was his main concern. Ken had explained the pros and cons to the different levels of grit and warned Ron that the more slip resistance that is added; the harder it will be to mop the floors. He went on to advise on proper housekeeping and recommended that a walk behind scrubber be purchased.

On June 25th, roughly 45 days from first correspondence, NFW arrived at the building at 70 Halcyon Drive, Bristol, Connecticut to begin preparation of the floor. Although the floor was wide open, each area that housed the previous machines had been saturated over the years, leaving a film even after the prior owner had cleaned the entirety of the floor. With an industrial walk-behind scrubber from Tennant, NFW used an aggressive cleaner/degreaser along with an equally aggressive scrubbing pad to help eliminate any outside contaminants. It took two complete washes to eliminate the oil gloss, in which NFW was then able to start preparing the concrete.

Starting with a 2mm size of steel shot, the entire floor was “opened up.” This process helps to remove the top layer of concrete, as well as create a profile that allows for a deeper diamond cut with industrial walk-behind grinders. Following this process, an area was then prepared using an industrial walk behind grinder to allow for Ken to perform a multitude of floor samples, of which he was in direct contact with the manufacturer’s chemists creating a solution for the oil-laden floor. The following day, adhesion and pull tests were completed, and the best product for this floor was chosen.

After being able to sit overnight, several areas of embedded oil had resurfaced. The entire floor was then prepared a second time using large grinders equipped with blades that are impregnated with diamonds. A rigorous task to complete, over 1/8” of existing concrete was removed to eliminate the contaminated portion of the slab. Directly behind the industrial grinder, the concrete dust was removed using portable industrial vacuums. Given the summer heat wave conditions, doing this was essential as allowing the dust to sit for too long would cause the dust to re-attach itself to the floor. Once more, the floor was given an evening to rest, allowing for any oil that may still have been embedded to show through. These areas were cleaned and degreased once more, and the entire floor was ground for a second time before lunch.

Following a short break, the driven crew, equipped with spiked shoes and roller poles, made their way onto the floor to start the initial coat. It took a little over four hours from the first mix being poured out to complete. The following day, the crew came in and gave the entire floor a once-over with a large rotary buffer using screen. After vacuuming, and tack ragging, the crew installed a second, pigmented, coat to the floor. On the following day, the process of screening was repeated prior to the installation of a final coat. The final coat consisted of a high-performance urethane.

There are many factors in a business that will change which flooring system will be needed at the end of the day. When sitting down with a potential customer, our experts at New England Floor & Wall bring attention to a few key questions for our clients before they make a decision about their new floors. As with any choice, knowing more about the current situation will help cast a decisive vote.

4 Questions to Ask Before Choosing a New Flooring System

1) What extremes will this floor have to handle?

If your business handles caustic materials or houses multiple fork lifts that are used daily, you will need a different type of system than a business that only has foot traffic.

2) Will this area be used as a showcase?

There are many times when businesses will showcase an entire room – be it an updated restaurant, installing a new piece of equipment to bring in added revenues, if these changes were made available from investors money or even if it is a plant manager showing his corporate office for the first time.

3) Do I have a shutdown coming?

Lots of times flooring projects are planned around a factory shutdown as this will not incur any additional expenses to complete the project. While flooring projects can be completed in conjunction with the business still running, certain flooring options that New England Floor & Wall provides incur byproducts during curing (such as completing our high performance resinous flooring system.) Many of these projects can be completed by creating a sufficient amount of air exchange in the room; however, there are times where products known as zero-voc (volatile organic compounds) can be used if a shutdown is not in sight, and a floor drastically needs repair.

4) How much money do I have to spend?

This is a loaded question, but a question that is always asked. A start-up business may not be able to spend top dollar on finishing their workplace as their funds may need to be allocated elsewhere. Luckily, New England Floor & Wall has options at many different price points.

Let New England Floor & Wall help you make a decision based upon the answers to these questions today, contact us now at (844) 463-7699!